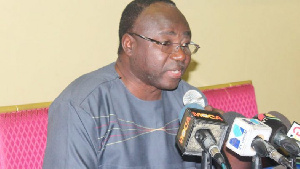 The Chairman for the Public Accounts Committee (PAC) James Klutse Avedzi has asked the state to confiscate the proceeds from the sale of contracts by the dismissed Chief Executive Officer of the Public Procurement Authority (PPA) Dr. Adjenim Boateng Adjei.

President Akufo-Addo dismissed the PPA boss following the release of a CHRAJ report indicting him in the ‘contract for sale expose’ by investigative journalist Manasseh Azure Awuni.

Speaking to the media, the deputy minority leader described as lenient a five-year public service ban imposed on the dismissed CEO.

He acknowledged that the action taken by the president was ‘a good beginning’.

“it’s a good beginning that the president is acting on the recommendation of CHRAJ. But I’m wondering why five years, why should he come back to public service in the first place?”

“I think that whatever income or resource that he gathered from these activities should be taken away from him. Definitely, he might have sold some of the contracts and made some money and if the findings reveal that this is the amount of money he made out of this back deal, the monies should be confiscated by the state and then should be banned from public service completely.”

He added, “once the monies he made from this dubious action is confiscated, it will serve as a deterrent to other people who might be planning in the same line.”

“For me as the chairman of the PAC, if the money is state money that he took, he should be surcharged, interest should be added. But in this state, we cannot say that he took state money, but he acted wrongly to extort money from individuals. So, that money should be confiscated to the state,”

COCOBOD trial: Scientist who analyzed Lithovit admits in court he is not an expert in fertiliser