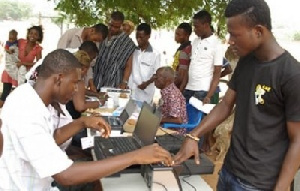 The most discussed topic in the country today is that of election related violence. The situation is so rife that the Ghana Police Service has identified polling stations across the country as hotspots.

The Police Service last week furnished the National Election Security Taskforce with details of 4,098 flashpoints to guide its tactical arrangements and deployments across the country’s 16 regions.

This phenomenon has been with us since 1992, when we had our first election under the Fourth Republican dispensation.The reason why Ghana has not been able to put an end to the occurrence is that, those who perpetrate the act do it with incredible bravado that benumbs the mind.

They are always shielded by the same politicians, who when in opposition cry foul, but when in government see their act as normal and must be supported.

The intensity of their acts, increase in leaps and bounds anytime the country is preparing for an election, whether national or bi-election.

2020 election is no exception. As a newspaper we applaud the proactiveness of the Ghana Police, by releasing the list of hotpots.

We are, however, minded by the actions of the Police in the past, especially the violence that characterized the Ayawaso West Wuogon by-election.

During the by-election, thugs were dressed up in police uniforms and used to intimidate and harass political opponents, forcing the National Democratic Congress (NDC) to boycott the election.

With the level of desperation observable as the Election Day draws close, well-meaning Ghanaians, have every reason to be apprehensive, because citizens, who are harassed, do not know what to make of the situation, or who to turn to, and yet it is affecting their way of life.

Another issue of concern is the way and manner politicians and their supporters during the campaigns, wilfully violate the COVID-19 protocols.

As a newspaper, we are tempted to believe that the Police do not appreciate sufficiently the security implications of a likely heightening of the disease. If the Police do not know, it is also their business to ensure that the protocols are observed even during campaigns.

On our part, it is pertinent to call the politicians’ attention to the hallowed principle of democratic practice – public interest in words and actions.

Staff sues KATH for advertising his position while on mandatory leave