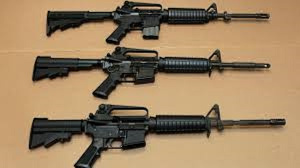 Six thugs alleged to be sympathizers of the ruling New Patriotic Party(NPP) have been arrested at the University of Education Winneba, Ajumako Campus with loaded guns.

Reports say the thugs riding three Ford vehicles attempted to hide the guns at the constituency’s collation centre on the University campus. They are alleged to have been sent by the Assin Central Member of Parliament Kennedy Agyapong to cause mayhem at the collation Centre.

Some residents are said to have spotted the guns and reported their discovery to a team of Military personnel on patrol.

Speaking to Kasapa FM News’ Yaw Boagyan, the Ajumako Enyan Essiam Constituency NDC Secretary, Andrews Kojo Dodoo, stated that the arrest of these people has come as no surprise to them as the NDC picked intelligence on them.

He said the University’s Security refused to search the vehicle but the appearance of the thugs prompted the people around to call on the Military and they came around.”

The Ajumako Enyan Essiam District Chief Executive Hon. Emmanuel Ransford Kwesi Nyarko is reported to have apologized on the suspect’s behalf but that yielded no results.

They have been sent to Accra for further investigation.