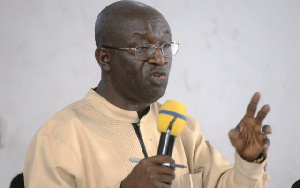 Senior economic advisor at the office of the Vice President, Prof Joe Amoako-Tuffuor has debunked claims of him illegally acquiring lands which belong to the people of Nungua.

His reaction comes on the back of allegations levelled against him for using his position to annex their lands illegally at Nungua in the Greater Accra Region.

According to the spokesperson for the angry members of Nungua, James Bortequaye, the senior economic advisor was “using the Office of the Vice-President to take our land at Sakumono and he claims he has documents signed by the Nungua Mantse and the Gyaasekye of Nungua and we are saying that the document he has is fake”.

But speaking on ClassFM on Wednesday, 11 November 2020, Prof Amoako- Tuffour said he legally acquired the land during the regime of the National Democratic Congress(NDC).

“A land bought in 2013/14 under the NDC regime and I built a wall and you come and tell me I’ve taken over Nungua land? Wasn’t it sold? Didn’t they collect money? The chiefs didn’t know what they were doing?

“From the Nungua Mantse and with all respect to the Gyaasekye, to the late Wolomei, didn’t they know what they were doing?” he asked.

He also charged the displeased youth and leaders of the Nungua area to channel their grievances to the appropriate quarters.

“So, I would rather they would have gone to the Nungua Mantse, Gyaasekye and ask: ‘Why did you let somebody come and take over our land?’ And, so, the word takeover is wrong, the land was sold by them and it was purchased by me with all documents.

Professor Amoako-Tuffour further advised the public to treat such accusations as false.

“This is false; how can I take over Nungua lands. How can I just walk there and take over lands? Explain to me how that can happen; with armed guards? Does that happen in Ghana? I don’t know…” he said.