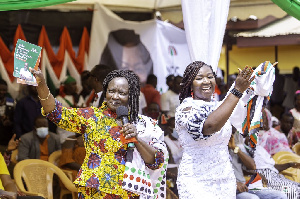 Running Mate of the National Democratic Congress, Professor Jane Naana Opoku-Agyemang has said if voted for in the upcoming elections, an NDC government will make sure every Ghanaian is looked out for.

The running mate of John Dramani Mahama was speaking on the party’s intentions outlined in their manifesto which includes a month extension of maternity leave for mothers when she made a campaign stop at Abirem in the Eastern Region.

“Trust me when I say no one will be left behind when the NDC comes into power- we are taking everyone along.

The additional one-month leave added to maternity leave may seem insignificant to many, especially men. But nobody understands a woman’s plight more than her kind. A woman’s perspective is important for inclusive national development and this is what sets the People’s manifesto apart. We will review the four months maternity leave and make improvements where needed,” the NDC running mate stated.

Professor Opoku Agyemang, whiles calling on Anyinam constituents to vote for the NDC to come back to power, also pleaded on the people of Anyinam to vote for the NDC Parliamentary Candidate, Mavis Ama Frimpong saying that a combination of an NDC president and a Member of Parliament will mean a lot of development for them.

On her part, the Parliamentary Candidate said the level of development the NDC has brought the Abirem Area despite having won the seat only once, gives enough reason for people to vote for the party.

“All the good things to have ever happened to the people of Abirem were under the various NDC administrations.

Despite having won the Abirem seat just once from 1996-2000, the NDC never pushed the people of Abirem to the sidelines when it came to infrastructure development,” she said.