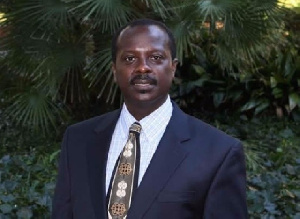 Professor Kwaku Azar, a lecturer at the University of Florida has submitted that the resignation of Martin Amidu as Special Prosecutor is a major setback in the fight against corruption.

Professor Azar said on Citi TV that he is disappointed and saddened by Amidu’s decision to quit his position.

He remarked that Amidu should have stood his grounds and resisted the temptation to resign.

Professor Azar iterated that by staying on as Special Prosecutor, Amidu would have proven that he is indeed committed to fighting corruption.

He, however, said that he is not shocked by Amidu’s decision to resign as the indications have been evident for the last two years.

“I knew it was only a question of time until the pressure got the better of him. At the same time, I say I am disappointed and saddened because I don’t think resignation under these circumstances is the best way out because when you read the letter, it is one where the Special Prosecutor feels his functions are being interfered with by the Presidency. I would expect an independent Special Prosecutor to stand his grounds and say that the taxpayer put me here to be an independent prosecutor to do my job; I am not going to allow anyone including the President to interfere with my job and if I have found that I am no longer happy, I am going to do my work in terms of investigating, prosecuting and not allow anyone to push me out.”

“If you have seen wrongdoing and your response is to run away from the wrongdoing, then you are not doing the people’s task because the people anticipated that some of these wrongdoings will occur and when they do occur, they expect you to fight it”, Prof. Azar decried.

“I wouldn’t say I am surprised although I will say I am both saddened and disappointed. I am not surprised because the frustrations of the Special Prosecutor over the years have been palpable”, he said.

Martin Amidu resigned on Monday, November 16 2020 with an explosive letter to the President, Nana Addo Dankwa Akufo-Addo. A subsequent one to the public also detailed what informed his decision.

“This is to inform the public that I resigned from my position as the Special Prosecutor of the Office of the Special Prosecutor with immediate effect upon the submission of my letter of resignation with reference number OSP/2/AM/14 dated November 16, 2020, which was received at the Office of the President at 15:15 HRS this afternoon,” he stated in his letter to the President.

According to him, “The reaction I received for daring to produce the Agyapa Royalties Limited Transactions anti-corruption report convinces me beyond any reasonable doubt that I was not intended to exercise any independence as the Special Prosecutor in the prevention, investigation, prosecution, and recovery of assets of corruption. My position as the Special Prosecutor has consequently become clearly untenable,” hence the decision to resign.

13 shops razed down by fire at Nkawkaw