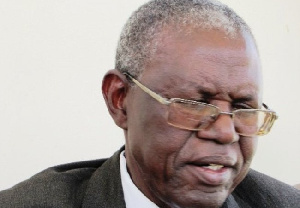 Former MP for Zebilla Constituency, John Akparibo Ndebugri says the only way true resolution will be brought to bear on issues surrounding the controversial Agyapa deal, will be when a new government is brought to power.

According to the former legislator, the resignation of Mr Martin Amidu as Special Prosecutor, indicates that President Akufo-Addo has some interest in stopping an investigation into the deal. He has therefore urged Ghanaians seeking to see prosecution on the deal, to consider voting for another government.

“The government can still decide to prosecute if it is minded to do so. But it is clear from Martin’s resignation letter that the president himself was preventing him from proceeding. So it means that matter has to be in abeyance and on the 7th of December if Ghanaians want that matter to be dealt with properly they should vote accordingly. And then maybe the ensuing government will do something about it,” he stated in an interview with Joynews on Monday night.

He adds that unless a new government is voted into power, the Office of Special Prosecutor will be of no use and therefore must be scrapped.

He emphasized that there can never be a resolution on the subject so far as president Akufo-Addo is in power.

“As for what happens to the Agyapa deal, it is neither here nor there. Because Mr Amidu has made it clear that he has resigned because the president himself called him and put pressure on him not to deal with the matter and he is still president,” he said.

In a subsequent statement to the Ghanaian public, Mr Amidu said his decision to accept the appointment as Special Prosecutor was based on the president’s guarantee of his independence.

He however states that the president, following his recent corruption risk assessment conducted on the Agyapa deal has sought to interfere with his work by dictating to him how to act as Special Prosecutor.

“I should not ordinarily be announcing my resignation to the public myself but the traumatic experience I went through from 20th October 2020 to 2nd November 2020 when I conveyed in a thirteen (13-paged) letter, the conclusions and observations on the analysis of the risk of corruption and anti-corruption assessment on the Report On Agyapa Royalties Limited Transactions and Other Matters Related thereto to the President as Chairman of the National Security Council, cautions against not bringing my resignation as the Special Prosecutor with immediate effect to the notice of the Ghanaian public and the world,” he stated in his statement to the public.

Among other things Mr Amidu points out the lack of independence, political interference as well as lack of needed resources and staff as factors that contributed to his resignation.