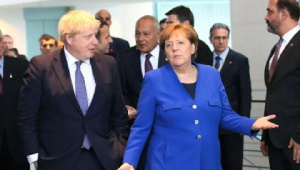 France, the United Kingdom, Italy, and Germany have threatened sanctions against those obstructing inter-Libyan talks. The talks are aimed at establishing transitional institutions until elections slated for December 2021.

In a joint communiqué, the four EU nations said “We are ready to take action against those who obstruct the Libyan Forum for Political Dialogue and other tracks of the Berlin process, as well as those who continue to loot state funds or commit human rights abuses in the country”.

The communiqué issued by the French presidency have thus ‘’called on all international and Libyan parties to refrain from any parallel and uncoordinated initiative that risks undermining the efforts of the United Nations.’’

The Libyan delegates charged with setting up a unified executive are due to resume virtual discussions on Monday after the first meeting in mid-November in Tunis.

This meeting led to an agreement on elections on December 24, 2021, but not on the names of the future leaders of the transition.

Acting UN envoy, Stephanie Williams, had then warned the proponents of the “status quo” concerned above all to “preserve their privileges.

Libya has been plunged into chaos since the NATO-supported uprising that toppled Muammar Gaddafi’s regime in 2011.