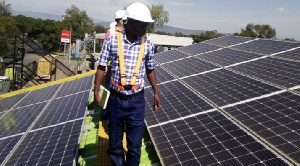 Globally, there has been a renewed push for the use of clean and cheaper sources of energy for industrial and domestic use.

Solar and wind energy sources have been touted globally and especially in Africa as an alternative power to deal with the high cost of electricity and frequent outages.

The adoption of solar and other clean energy sources in Africa has had an intended consequence on revenue generation in the power sector as more households and industries shift from power sources provided by the government to owned-generated power, per recent events in Kenya.

Kenya’s public electricity provider has been rattled by dwindling revenues owing to a growing shift to solar energy.

According to Kenya Power, its industrial customers, who account for about 54.8 percent of its sales revenues, are shifting to solar energy, thereby causing it millions in revenue and excess supply capacity, according to a local newspaper report.

“The company operated in a challenging environment over the financial year under review, where demand growth at 3.7 percent remained below the projected level of five percent. The dampened demand growth is further compounded with the increased threats of grid defection by the industrial category as decentralized renewable energy options are becoming more available and cheaper,” according to the latest figures from the energy provider.

The shift from the national grid to solar power by industries has been attributed to the high cost of electricity and irregular supply of power.

Kenya has since 2004 embarked on massive electrification by connecting many rural communities to the national grid as well as the signing of many power contracts which led to the generation of excess power supply.

Despite the generation of excess power, uptake remains flat amid reduced consumption by homes and businesses in the wake of Covid-19. Kenya Power projects the latest growth in demand to remain at approximately 2.3 per cent in 2020, which is much lower compared to the historical 10-year average of 5.9 percent, according to the report.

Kenya Power reportedly enjoys a monopoly in Kenya’s energy market but continues to record low revenues due to massive corruption, looting and poor leadership concealed with lame excuses, according to another local newspaper.

Africa Logistics Properties (ALP), Mombasa International Airport, the International Centre of Insect Physiology and Ecology (Icipe) are some of its biggest customers have recently installed their own power units.

Nairobi’s Garden City Mall has also set up a $1.9 million solar plant to generate 1,256-megawatt annually, projecting that this would help it cut power bills by about Sh31.6 million or about $290,000 per year.

Ethiopia Conflict: The story of a pregnant refugee