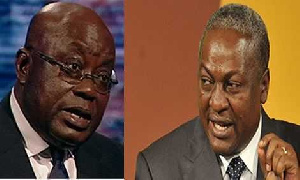 He noted that over the few years that Mr. Akufo-Addo has been in office, several jobs have been destroyed by his administration.

He cited the way and manner in which the banking cleanup exercise was undertaken by the government as one of the, in his view, poorest ways of handling a crisis of that nature.

He said to the people of Navrongo during his tour of the Upper East Region that “This is the greatest political sakawa that has ever happened,”
“This government has destroyed more jobs than it has created. The only job they can point to is NaBCo, and yet they have destroyed more than 10,000 jobs in the bank sector.”

He referred to the way and manner GN Bank was treated as one of the wasy Mr Akufo-Addo used in destroying businesses and jobs.

“All the GN banks used to have staff in them all over the country. Today where are those staff? They are all sitting at home,” John Mahama said.

Akufo-Addo government is the biggest ‘sakawa’ in history – Mahama