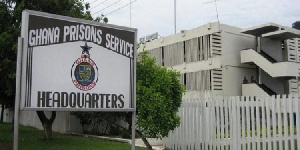 Over 10,000 prisoners across the country will be voting in the December 7 elections.

This is four times the number of prisoners who registered in the last elections, according to the Public Relations Officer of the Ghana Prisons Service Supt. Courage Atsem.

Contributing to a roundtable discussion on the Sunrise Morning Show on 3FM, moderated by Alfred Ocansey, Supt. Atsem indicated “All Prisoners who registered will be able to vote and as we speak we have over 10,000 inmates who have successfully registered and will be participating in this year’s elections”.

The aim was to assess the level of preparedness by these security agencies before, during, and after the December 7, elections.

Under Article 42 of the 1992 Constitution, the Supreme Court in 2010 upheld the rights of prison inmates to vote in general elections in Ghana.

In 2016, Electoral Commission Officials were granted access to the prisons facilities to undertake the voting exercise for the inmates while prison officers monitored the electoral.