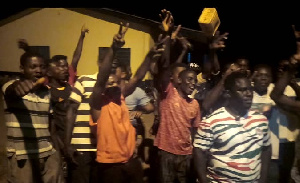 Residents of Adaklu, numbering about 30 have massed up at the Adaklu Waya Police Station to protest against a decision by the Electoral Commission to move ballot boxes containing ballot papers from yesterday’s special voting exercise and other election materials from Adaklu to Ho.

According to the residents most of whom are NDC sympathizers, they had a call from the Electoral Commission informing them about the decision which they are against.

The NDC secretary for the Adaklu Constituency, Charles Agbesi told journalists that the ballot boxes are better protected at Adaklu since it is their own votes thus, the decision by the EC is unthinkable.

He said, “This afternoon we received information from the EC office that the Ho municipal police commander called to inform her about their intention to move the special voting ballots boxes to Ho for safe keeping to the police armoury and that she was informing us. And we were taken aback, because these materials are brought here few days earlier before than the special voting and nothing happened -we all came here to check and after that, the special voting went on so we don’t understand why they have now decided to move it.”

He added that, “In any case, this is a police station and we are of the view that as a political party, we are not comfortable with that arrangement because these are Adaklu ballots, we are able to protect our ballots here than it being moved to Ho, that is why we are massing up.”

He however indicated that the protest is a peaceful one and would continue until the interested parties come to a consensus.

Checks from the police confirmed the decision by the EC.

Sources at the police station also indicated that the Adaklu police station is understaffed and may not be able to deal with any attack should it happen hence, the decision to move the election materials out of the place to the Ho municipal police station armoury.

December 7 should remain a holiday – CODEO