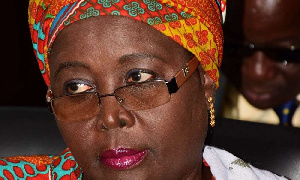 Provisional results received from the Nalerigu-Gambaga Constituency, Hajia Alima Mahama has been crushed out of parliament.

The Member of Parliament (MP) for Nalerigu-Gambaga Constituency in the North East Region is trailing behind the National Democratic Congress (NDC) Parliamentary Candidate for the area, Alhaji Baba Issifu Seidu, with 5,000 votes.

According to sources within the New Patriotic Party, it is unlikely she will be able to overturn the margin with the few polling stations left to be collated even if all persons in those areas vote in her favour.

This is the second time she has lost the seat to the NDC after a similar one in 2008.

Meanwhile, the NPP has won the Chereponi, Yagaba-Kubore and Yunyoo seats all in the North East Region.

LIVESTREAMING: Updates on wins and losses in Ghana’s election