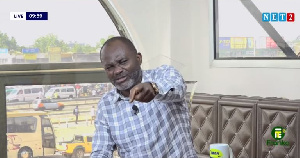 The Member of Parliament for Assin Central Constituency, Kennedy Agyapong, has revealed he almost lost his seat due to the bad roads in his constituency.

According to him, even though it is not the responsibility of a Member of Parliament to construct roads in their constituency, his votes were “drastically” low because contractors have failed to complete a single road in his constituency which he lobbied for.

He adds that most MPs who also lost their seat especially in the Central Region faced the same ordeal.

Speaking on National Agenda on NET 2 TV the lawmaker said, “…electorates don’t understand that MPs do not construct roads. The responsibilities of an MP is to lobby for the road to be fixed or constructed. As soon as the road is given out as contract, the MP can’t do anything. It is the contractor who has the power.”

“In my constituency for instance, as if I’m cursed, what made my vote reduce drastically is roads. None of the roads in my constituency was fixed; if I were not strong, roads would have made me lose my seat. My contender who is from America and doesn’t reside in the constituency has 14,000 votes, how?” he added.
Source: Ghana Web