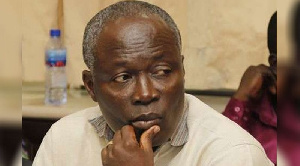 Member of Parliament for Odododiodoo constituency, Edwin Nii Lantey Vanderpuye, has revealed that there is a total failure of law and order within the Ghana Police Service.

The former Youth and Sports Minister said most of the officers who he claimed take instructions from politicians, exhibit a high level of indiscipline within the service.

Mr Vanderpuye has called for a change of attitude within the security service in order to safeguard it from political control.

He said these in an interview with TV3 after the Minority presented a petition to the Electoral Commission (EC) against the results of the elections, on Tuesday, December 22.


He said, “There is total breakdown of law and order, command and operations within the security services.”

“There is total breakdown of discipline within the security services. I experienced it when a whole officer of the Ghana Police service was issuing instructions and an ordinary rank was countering the instruction of the officers.”

“Today we think it is Nii Lantey Vanderpuye, no. It is the moral fiber of this country which is being adulterated and mutilated. It is something we must all rise up to.”