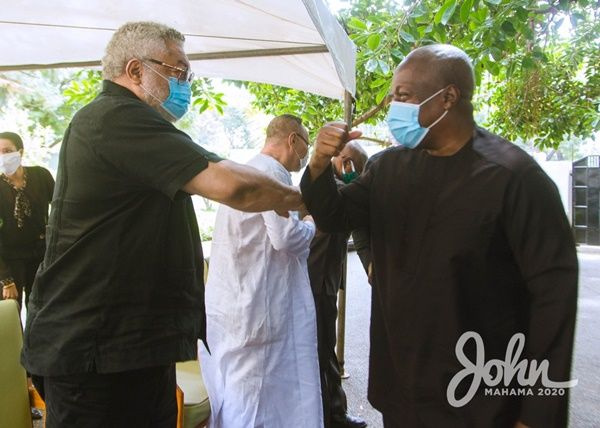 Former President John Dramani Mahama has asked all members of the National Democratic Congress (NDC) to remain united and build on the principles that the late founder of the party, Jerry John Rawlings left behind.

Speaking at the 39th celebration of the 31st December anniversary on Thursday December 31, 2020 in Accra, Mr Mahama said the late former President prefers to be remembered in the hearts of men than by monuments and statues.

The only way to ensure this, Mr mahama said, is to ensure at all times that the political party that he founded remains stronger.

“My comrades now is the time for us to remain committed and united to the cause of our party. How do we preserve the principles of the Revolution and the memory and legacy of our founder JJ FLT Rawlings for posterity?”

“He said, I prefer to be remembered in the hearts of men than by monuments and statues. And I believe that the only vehicle that can assure that he remains in the heart of men is the political party that he founded.”

The National Chairman of the National Democratic Congress (NDC) used the occasion to dismiss claims that the NDC is behind the recent fire outbreaks in some markets in the country.

He said that the NDC has the records of building markets across the country whenever the party forms the government.

His comments come after the NDC has been accused of being behind the recent fire outbreaks in some markets and other facilities across the country.

The governing New Patriotic Party (NPP) in a statement signed by the General Secretary John Boadu on Monday December 21 said that the sheer rampancy and coincidence with which the markets were burning, coupled with the constant alleged threats by some elements of the opposition to burn markets in order to drum home their concerns over the outcome of the 2020 general elections, leaves no lingering doubt that the NDC are behind fire outbreaks.

“The NPP has noted with grave concerns and revulsion, the increasing spate of market fires being experienced across the country in recent times,” the statement said.

It added “The sheer rampancy and coincidence with which the markets are burning, coupled with the constant threats by some elements of the opposition to burn markets in order to drum home their concerns over the outcome of the 2020 general elections, leaves no lingering doubt that they are behind these arson attacks.

“For instance, the NDC National Chairman, Samuel Ofosu Ampofo, is on record to have incited his party footsoldiers to undertake series of “overt and covert operations” including setting markets ablaze and embarking on armed robbery attacks in order to create fear and sense of insecurity in the country. Ofosu Ampofo is of course being prosecuted in court for this treasonable comment, and the court has established as a matter of fact that it was his voice in that leaked tape,” Mr Boadu’s Statement said.

But addressing the supporters of the NDC at the anniversary, Mr Ofosu Ampofo said “Our performance in the just-ended elections shows what a united and determined people can achieve when they resolve to achieve that.

“We believe in principle position that our leader and our incoming president John Dramani Mahama has taken.