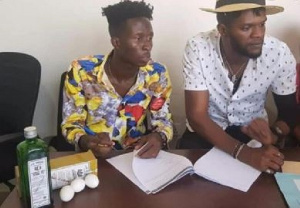 Artiste Manager and C.E.O of OGB record label, Ogidi Brown on January 11, 2020, terminated the appointment of Isaac Arko also known as Cryme Officer after what he described as a breach of terms and conditions of their contract.

Just a little over a year after signing him, Cryme Officer’s contract was terminated because he posted a video in reaction to the ongoing scuffle between Ogidi Brown and Fameye.

In what he described as a piece of advice, Cryme Officer lamented about how his manager’s constant rants on social media were affecting his career.

Likening the whole situation to an instance where a man still talks about his ex after finding a new lover, Cryme Officer does not understand why Ogidi Brown appears so concerned about Fameye when he no longer exists on the record label.

“Ogidi Brown, what you are doing is going against me. People are attacking me and it is going against my career. Seriously speaking I think it will be best if you take your actions off social media. Per the video, I have seen and what you are saying, if anything should happen, I’d quit from your label. Let’s take for instance, a lady breaks a man’s heart and that same man finds another lover but despite that, the man still talks about his ex. How do you think the lady will feel? It is very bad. Why will you take your actions to the extreme,” he stated in the video

Shortly after this video went viral, a letter stating the termination of contract between OGB records and the new artist was posted on Ogidi Brown’s social media pages.

“This contract is terminated for certain actions taken over social media against the record owner. It is about the viral video you made concerning issues between Ogidi Brown and his former artiste Fameye. The manager finds your utterances in the video as a means of betrayal and disloyalty. You are hereby to cease all performances, recordings, and activities that concern your part of the contract in consideration,” the statement read.

Initially, the signing of this particular artiste, ‘Cryme Officer’ brought about a whole lot of controversies because Schnapps and eggs were displayed on the table during his signing.

This act by Ogidi Brown took the center stage of discussion on social media.

Even though the scene looked funny, many suggested that the act would deter the new artiste from ditching the label in the future just like Fameye did.