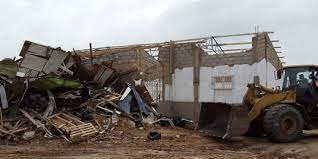 Organised by the Greater Accra Regional Coordinating Council in collaboration with the Accra Metropolitan Assembly (AMA) and the Ablekuma Central and the Korle Klottey Municipal assemblies, the day-long operation involved a massive clean-up of drains, streets and other open places.

The exercise, which commenced from the UTC Market on the Kwame Nkrumah Avenue, through to the Farisco area, along the Graphic Road to the Obetsebi-Lamptey Interchange, was highly patronised.

Led by Mr Quartey, the Korle Klottey Municipal Chief Executive (MCE), Nii Adjei Tawiah, and the AMA Chief Executive, Mr Mohammed Adjei Sowah, the team began the exercise on the Graphic Road, where unauthorised makeshift containers were cleared from the shoulders of the road.

Members of security agencies, including the Ghana Armed Forces (GAF), the Ghana Immigration Service (GIS), the Ghana National Fire Service (GNFS), together with workers of Zoomlion Ghana Limited (ZGL), participated in the decongestion and clean-up exercise.

Staff of companies on the principal roads, including the Graphic Communications Group Limited (GCGL), Rana Motors, Toyota Ghana Limited, Pepsi Cola, CAL Bank, among others, also participated in the exercise.

Mr Quartey made sure that traders who were cleared from the pavements in the central business district had not returned.

Before and after exercise.

Areas that were affected by the decongestion contained ramshackle structures, most of them built with wood.

They served as abodes for squatters and criminals.

The sanitation situation in those places was nothing to write home about, as people dumped waste indiscriminately.

Sometimes the rubbish found its way onto the streets.

However, after the exercise, sanity returned to the areas.

While some of the affected persons counted their losses, scavengers and scrap dealers busily searched through the debris, collecting roofing sheets, iron rods and pieces of wood.

An excavator loaded the waste materials onto tipper trucks that carted them away.

While some occupants of the unauthorised structures folded their arms and watched what they described as an impromptu exercise, others, who indicated that they had been informed ahead of the exercise, voluntarily participated in the clean-up.

One of the occupants, who gave his name as Emmanuel Agyei, told the Daily Graphic that he was given prior information weeks to the exercise, and that he had parked his wares away last Monday, in anticipation the decongestion.

Although he applauded the exercise, he noted that there was the need for the AMA to institute measures that would ensure that the victims had alternative portions at the CBD to sell their wares in order not to return to the unauthorised sites.

On the other hand, Ms Ama Yeboah, also a victim, said the assembly was just over-zealous in demolishing the structures.

While admitting that the traders had invaded an unauthorised portion of the road, Ms Yeboah said selling at the demarcated portion of the land where the decongestion took place was justified.

According to her, they were made to pay GH¢15 annually and GH¢1 on a daily basis.

At the Darkuman Junction (Kokompe) in Ablekuma North, where auto parts dealers are located, the team, together with the AMA, decongested and cleaned up the entire enclave.

In all, the exercise will be carried out in all the 29 municipalities in the Greater Accra Region, with six being so far covered.

Speaking to the Daily Graphic, Mr Quartey explained that plans were underway to ensure that the recovered lands were put to good use to beautify the capital.

“It is not as if we are depriving anyone of his or her wages; the right thing must be done to ensure that the capital is a better place for everyone,” he said.

Reacting to the possibility of the evictees going back to the areas, he said: “If they come back 20 times, we will move them 30 times.”

“We are doing all this to revive the lost confidence in the capital when it comes to sanitation and also bring back discipline to the capital,” he stated.

The minister further explained that the move would also help put the country on the international map and make it a preferred hospitality destination for tourists just like Dubai, the United States and other top hospitality countries.

Mr Quartey appealed to the media to support the initiative.

He admonished residents of Accra to embrace and actively participate in the “Let’s Make Accra Work” campaign.

According to the regional minister, many unauthorised structures in the capital city had become a nuisance to lots of legally operating businesses.

He said he could not fathom why owners of those makeshift structures had refused to do business at new locations provided for them by the government.