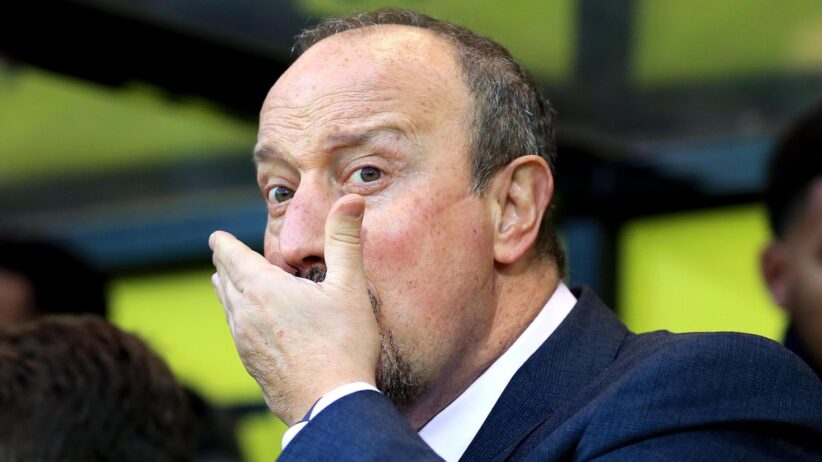 Everton have fired head coach Rafael Benitez in the wake of their 2-1 loss at Norwich on Saturday.

Benitez was initially drafted in to replace Carlo Ancelotti in the Goodison Park hot seat back in June, despite having previously managed Everton’s arch-rivals Liverpool between 2004 and 2010.

The Toffees began the 2021-22 campaign strongly under the Spaniard but quickly lost form amid the loss of a number of key players to injuries and positive Covid-19 tests, with a 2-1 defeat to relegation battling Norwich proving to be the last straw for an expectant board.

The club have confirmed Benitez’s exit in a statement, which reads: “Everton Football Club can confirm the departure of Rafael Benitez as first-team manager.

“Benitez, who joined Everton in June 2021, has left the club with immediate effect.

“An update on a permanent replacement will be made in due course.”

What has Benitez said?

Benitez published a statement on his personal website, saying that the club’s financial situation and injury problems made the job difficult.

He wrote: “We knew it wouldn’t be easy, and that it was a big challenge, both emotionally and in terms of sport. My love for this city, for Merseyside and its people, made me accept this challenge, but it is only when you are inside that you realise the magnitude of the task.

“From the very first day, my staff and myself worked as we always do, with commitment and full dedication, we didn’t only have to get results, but we also had to win over people’s hearts. However, the financial situation and then the injuries that followed made things even harder. I am convinced that we would have been better once the injured players were back and with the arrival of the new signings.

“The road to success isn’t easy and sadly, nowadays in football there is a search for immediate results and there is always less and less patience; unfortunately circumstances have determined the results and it won’t be possible to continue this project.

“In any case, thank you to the Board, to the staff, to the players, and to those fans who have supported us during this time.

“My best wishes for EFC.”

Everton picked up 13 points from their opening six Premier League games under Benitez to rise to fifth in the table, but then embarked on an eight-match winless run that included humiliating losses at home to Watford and Liverpool.

A 2-1 home win over Arsenal and a 1-1 draw with Chelsea at the start of December granted Benitez a temporary reprieve, but the Toffees went on to lose to Crystal Palace and Brighton before reaching a new low at Norwich this weekend.

Everton fans ultimately never warmed to Benitez, and he leaves with a record of seven wins, 11 draws and four losses in the Premier League, while also having overseen their surprise Carabao Cup third-round loss to QPR.

Back in the hunt! Klopp gets his wish as Liverpool ensure the Premier League still has a title race for now