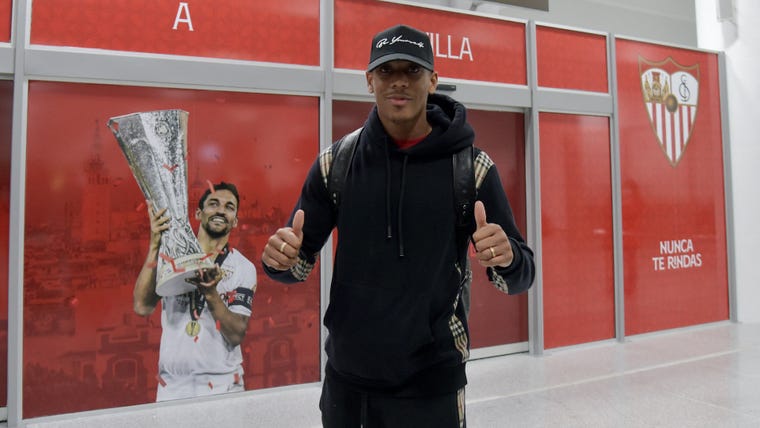 Anthony Martial has completed his loan move to Sevilla, the Spanish club announced on Tuesday.

The French striker has joined the club on loan for the rest of the season, with GOAL able to confirm Sevilla was his preferred choice despite interest from a number of clubs including Juventus.

Martial made just four starts in all competitions for Manchester United this season and is hoping to get more minutes in Spain to put himself in a better place to secure a position in France’s World Cup squad later this year.

GOAL can confirm Sevilla will pay €6 million of Martial’s salary for the next six months, with Martial opting to take a pay cut on the rest of his wages to facilitate the move.

Sevilla also convinced Man Utd to forgo a loan fee and the deal does not include an option to buy on a permanent transfer.

However, if all three parties are interested on the summer, there is a chance that the deal could be extended for a second season.

The move gives Martial a chance to prove his quality, having fallen out of the picture at Man Utd.

The 26-year-old has only started two Premier League games this season and was the subject of controversy in recent weeks.

Although the incident was later described as a “misunderstanding” between Ralf Rangnick and Martial, the German manager declared the player had refused to be part of the matchday squad against Aston Villa several weeks back.

Martial has made 269 appearances for Man Utd, scoring 79 goals since joining the club from Monaco in 2015.

He will hope to earn a spot in the France squad for this winter’s World Cup, having earned 30 caps for his country.

He was not a part of France’s squad for their 2018 World Cup triumph nor their squad for the most recent Euros, having most recently played in an international tournament in 2016.