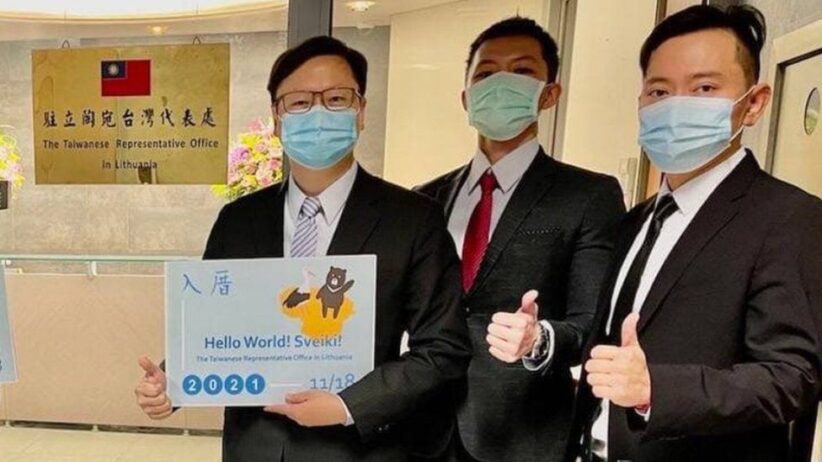 The EU has accused China of “illegal” trade practices as it launched an official dispute on behalf of one of its smallest member states.

The row was sparked when Lithuania allowed Taiwan to open a de facto embassy there, angering Beijing which sees Taiwan as part of its territory.

China downgraded its diplomatic relations with Lithuania, but denies ordering a boycott of Lithuanian goods.

The EU has now taken the case to the World Trade Organisation.

European Trade Commissioner Valdis Dombrovskis said China was blocking Lithuanian imports and imports from other EU states, if they have components coming from Lithuania.

Mr Dombrovskis told the BBC that the EU would still try to find an “amicable solution” in parallel with pursuing the WTO case.

“For the time-being we have not found a negotiated solution. That’s why we are now exercising our WTO rights.”

But experts say the WTO case could easily become bogged down.

“It will probably take years to litigate,” said Noah Barkin, a Visiting Senior Fellow at the German Marshall Fund.

“So taking this to the WTO is positive, but alongside that you need to see the big member states like Germany and France stepping up and signalling to China that if the coercion continues there’s going to be a cost.”

China sees self-ruled Taiwan as a breakaway province while Taiwan sees itself as an independent country.

Beijing downgraded diplomatic relations with Lithuania last year, after a Taiwanese representative office was opened in the capital, Vilnius.

The office carried the name Taiwan rather than the capital Taipei, which is used by many foreign nations to avoid offending China.

Lithuania’s president has since said the name was a mistake with reports a “modification” is being considered.

Beijing has denied ordering a trade boycott but the European Commission says it has evidence that China is refusing to clear Lithuanian goods through customs, rejecting import applications and pressuring EU companies to remove Lithuanian inputs from their supply chains.

“I think until now it wasn’t clear to Beijing that everybody would rally behind Lithuania,” said Professor Sven Biscop of Ghent University and the Egmont Institute.

He said there had been “some grumbling” within the EU, “because Lithuania didn’t really coordinate its moves. It was hit by Chinese sanctions and then asked for support”.

An EU diplomat told the BBC: “While China completely overreacted, there’s some irritation that Lithuania has dragged the EU into this dispute.”

The first stage of WTO dispute settlement procedures is the “request for consultations”, where the EU would formally ask China for more information.

If the matter isn’t resolved within 60 days, the EU may request a panel to rule on the dispute.

Separately, the European Commission has proposed a new trade sanctions regime so it can respond more rapidly to cases of “economic coercion”.

Those plans are still going through the legislative process but an analyst at the Swedish National China Centre isn’t convinced that even these measures would work.

Viking Bohman said: “Beijing seems uncompromising on issues relating to its so-called core interests of which Taiwan is one of the most important. Even if the EU summoned up strong counter-measures, it’s unclear if China would change its behaviour.”

In the short-term, Noah Barkin says European countries should do more to help mitigate the economic impacts for Lithuania.

“If European companies pull out of Lithuania because of this Chinese coercion, then Beijing will have won and the lesson it will draw from this is that it can pressure European countries to tow its red lines.”