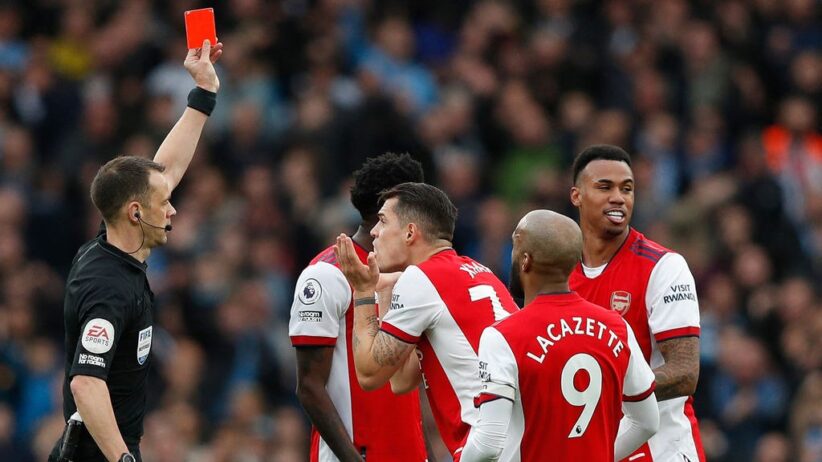 When Gabriel Martinelli was shown a red card at Wolves last Thursday, he became the 12th Arsenal player to be sent off in the Premier League since Mikel Arteta was appointed manager in December 2019.

No other team in the English top flight has had more than seven players dismissed during the same time frame.

But are Arsenal really the league’s dirtiest team? Or are they being unfairly targeted by officials because of a perceived propensity for ill-discipline?

After Martinelli had become the fourth Gunner to be dismissed since the turn of the year, Arteta argued that his players are being hard done by.

“You ask me if I am happy with the decisions that we have had this season – I am not at all,” the Spaniard told reporters. “But that is a conversation that I will have with the officials privately.

“[Those conversations] are going to happen soon.”

When you explore the statistics behind Arsenal’s poor disciplinary record under Arteta, it is easy to see why he feels they are being harshly treated.

Since his first game in charge, away at Bournemouth on Boxing Day 2019, Arsenal have committed 785 fouls in the Premier League and been shown 12 red cards.

That’s a red card on average once every 65.4 fouls committed.

In contrast, Burnley have committed 804 fouls during the same time frame and have yet to be shown a single red.

Liverpool, meanwhile, have had just one player sent off despite committing 820 fouls, Manchester United have had three red cards from 934 fouls and Tottenham have seen three players dismissed from 908 fouls.

Of course, the number of fouls a team commits does not directly correlate with the number of red cards, as it all depends on the individual incident that leads to the referee taking action.

But what the numbers do show, at least, is that Arsenal are far from a dirty side.

Of all the teams who have remained constant in the Premier League since Arteta was appointed, only Manchester City (756) have made fewer fouls than Arsenal’s 785.

So, the Gunners do not give away many free-kicks. It’s just that when they do, they tend to get admonished with far greater regularity than other teams.

For example, since Arteta replaced Emery at the Emirates, Liverpool have picked up a card, either yellow or red, once every 8.91 fouls.

Arsenal, though, are averaging a card every 5.73 fouls.

So, it’s easy to see why many Gunners fans are frustrated, believing it’s a classic case of one rule for them, and another rule for everybody else.

While their players seem to be seeing red for relatively minor infringements, other teams appear to be escaping severe sanction for far worse misdemeanours.

Think of Ben Godfrey’s stamp on Takehiro Tomiyasu’s face during the game at Goodison Park. Somehow the Everton defender was allowed to stay on the pitch – even after a VAR check.

Crystal Palace’s James McArthur volleyed Bukayo Saka during the home draw with Crystal Palace and escaped with just a yellow card, while in the meeting with Manchester City on New Year’s Day, Martin Odegaard was denied a penalty after being tripped by Ederson – only for City to then be awarded a spot-kick of their own when Bernando Silva went down after a tussle with Xhaka.

All of these incidents have led to a real sense of injustice at Arsenal, but while the players have every right to feel wronged at times, they also have to accept some responsibility for their actions.

Gabriel Magalhaes lost his head against Manchester City and was shown two yellow cards in as many minutes following the penalty decision.

It was a red card that could have been avoided, as was Granit Xhaka’s at Liverpool in the Carabao Cup semi-final first leg, when he was sent for a professional foul on Diego Jota.

Thomas Partey was dismissed in the return game, again for amassing two yellow cards in a short space of time.

The first booking may have been debatable, but he was extremely naive to dive in again soon after his first caution.

All three of those reds were needless. The same goes for Martinelli’s at Wolves, even if Arsenal could point to similar examples in the past that have not led to players being booked twice for two incidents during the same passage of play.

“We know that playing with 10 men in this league we’re not going to get the points that we want,” Arteta admitted after the victory at Molineux. “We have to stop it.

“But, to be fair, it’s difficult to find more arguments and more ways to transmit that to the players.

“Everybody says it’s the most disciplined group they’ve seen in the last 15 years, but we are getting red cards for other things.”

Of the 12 red cards Arsenal have been shown under Arteta in the league, just three have been straight dismissals for bad tackles.

There have been two for violent conduct – Nicolas Pepe against Leeds and Xhaka against Burnley – while the rest were either for two yellow cards, professional fouls or deliberate handballs.

So, it’s clear that it’s not really a case of ‘Dirty Arsenal’ when it comes to Arteta’s side, and they have had justifiable reason to feel as if they have been the victimes of some poor calls.

However, they must also do what they can to avoid some of the needless red cards they have been shown over the past two years.

If they don’t, then their hopes of a top-four finish this season could come to a similarly frustrating early end.

‘Liverpool are a pain in the a**’ – Reds can still stop Man City dominance this season, says Guardiola