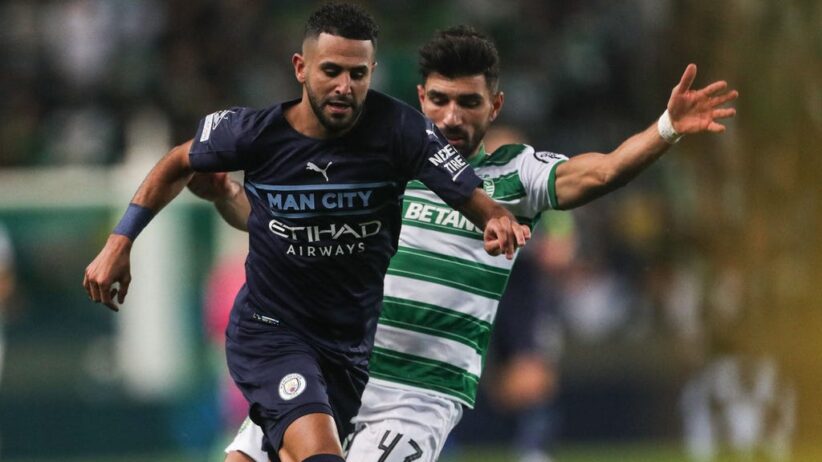 The Algeria ace lined up in attack alongside Phil Foden and Raheem Sterling to halt the aspirations of Ruben Amorim’s Lions inside Estadio Jose Alvalade.

As it proved a rewarding evening for Pep Guardiola’s men, they took the lead in the seventh minute, with Mahrez beating goalkeeper Antonio Adan – after he was teed up by Kevin De Bruyne.

Although the effort was chalked off for offside, the goal stood thanks to the intervention of VAR.

With that, the former Leicester City forward now boasts six Champions League goals in the 2021-22 campaign, the joint-most by a Manchester City player in a single season in the competition.

Also, the 30-year-old netted 10 goals in his last 11 games in the European club tournament.

Bernardo Silva doubled the advantage for the Premier League outfit in the 17th minute, before the Algerian set up Foden for the third in the goal-laden first half.

City made it four as Bernardo completed his brace to help Guardiola’s side set a Champions League knockout record for the biggest first-half lead in an away match.

Sterling’s strike two minutes before the hour mark completed the demolition as the Portuguese top-flight side now face an arduous task to reach the last eight.

Mahrez was in action from start to finish but English youth international of Congolese descent Luke Mbete was an unused substitute.

Addressing the media after the emphatic result, the 2019 Africa Cup of Nations winner lauded the displays and goals of teammates Silva and Sterling.

“Bernardo as well. What a goal! Bernardo and Raheem, very good, top goal.
“We push each other every day. We compete with each other for the best of the team. Today was a good performance.

“Every game we enjoy anyway. When you score a lot and you win it is more enjoyable.”

Unbeaten in their last thirteen matches in all competitions, the reigning English kings will square up against Tottenham Hotspur, Everton, Peterborough United and Manchester United before hosting Sporting in the reverse fixture on March 9.