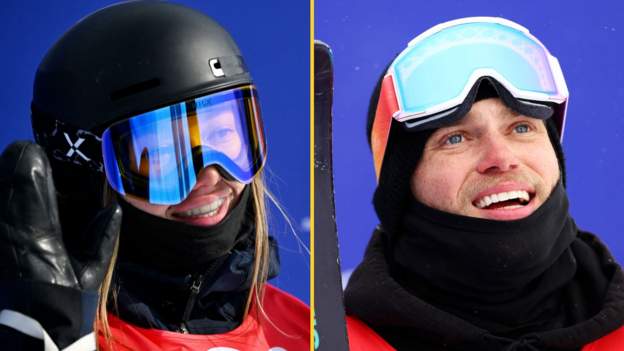 Freestyle skiers Zoe Atkin and Gus Kenworthy qualified for the halfpipe finals in differing fashions at the Winter Olympics in Beijing.

But team-mate Kenworthy scraped through to the men’s final, finishing in the 12th and final qualifying spot.

“Sometimes qualifying can be even more nerve-racking than finals so I just wanted to put one down,” the world bronze medallist told BBC Sport.

“After I landed my first run I was like ‘phew, pressure’s all off’ so I put an extra trick in there that I hadn’t trained just to try and I’m really happy I landed it to make finals.

“It’s so much fun – the course is perfect and I’m having so much fun skiing it. It was so fast today, I just launched out of the halfpipe and it feels like you’re flying. I’m having a great time.

“I do have a couple of tricks that I might be putting in tomorrow but you’ll have to watch and see!”

Atkin is the younger sister of Izzy Atkin, who four years ago in Pyeongchang won Team GB’s first Olympic medal on skis.

China’s favourite Eileen Gu topped qualification with a best of 95.50 as she chases her third medal of the Games in what is her strongest event.

In the men’s qualifiers, Kenworthy – who changed allegiance from the United States to Team GB for his final Olympics – fell on his opening run, a score of 8.50 leaving him with it all to do on his second.

He scored a much-improved 70.75 second time around, though faced a nervy wait until the end with only the top 12 progressing to Saturday’s final.

“I don’t think I’ve ever been more stressed out,” Kenworthy told BBC Sport.

“I could have done so much more. My first run I had a fall and then really didn’t want to fall again, and so I decided to be a little bit more conservative with my [second] run. Unfortunately I didn’t put it down quite as clean as I could have and the judges were pretty harsh on me for it, rightfully so, but it was not the position I wanted to be in.

“I feel very grateful that I am through to the final, and the final is a new day.”