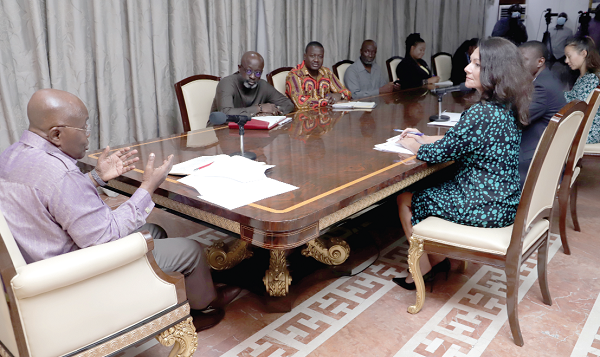 An agricultural input and service provider, Yara Ghana, has commenced the free distribution of $20 million worth of fertiliser to 100,000 small-holder farmers in the country.

Aside from the supply of the 18,000 tonnes of fertiliser which will help produce more than 500,000 tonnes of cereals, the company will also provide training and education for the farmers as part of what it calls a “Grow Ghana” initiative.

The West African Regional Director of Yara International, Danquah Addo-Yobo, announced this when he and the Norwegian Ambassador to Ghana, Ingrid Mollestad, paid a courtesy call on President Nana Addo Dankwa Akufo-Addo at the Jubilee House in Accra last Monday.

The call was in line with efforts to ensure food sufficiency in Africa, in the face of the global food security crisis and the way Norway and its companies could support in alleviating the challenges in the country.

“With the COVID-19 situation, fertiliser prices were going up, and towards the end of last year, the forecast was that the prices would come to normal, but the Russia-Ukraine war has aggravated the situation,” Mr Addo-Yobo said.

According to him, the company was using the market system to get the product to farmers and increasing the number of retailers and distributors in the country.

He said Yara was aware that such free distribution would attract some risk, saying to “address that, we are employing an IT tool to ensure every bag of fertiliser has a specific code on it”.

Mr Addo-Yobo added that at the retail point, the data of farmers would be taken to ensure that any farmer who received the fertiliser would be identified, using the Ghana Card as the reference ID.

He said only farmers who had the Ghana Card at the point of sale would be able to access the free fertiliser.

Ms Mollestad said her country was committed to not only global harmony but also ensuring food security through the production of sustainable food on the African continent.

President Akufo-Addo commended Yara Ghana for the intervention, especially at a period of global difficulties.

He expressed the hope that the country would continue to receive such support from the company and other Norwegian entities in various sectors of the economy.

The President said there was an effort to establish a fertiliser plant in Ghana to feed the local market and for export to neighbouring countries, adding: “We think that it will make a lot of sense, even in terms of West Africa and the larger African market.”

He, therefore, called for partnerships from companies such as Yara Ghana for the realisation of the project.