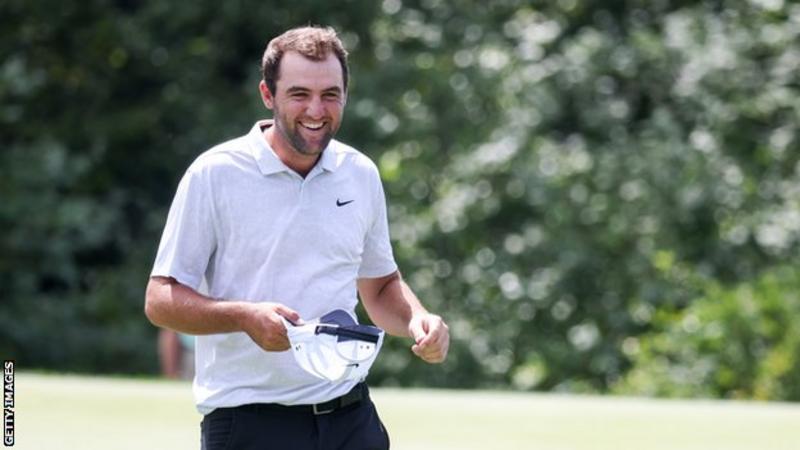 American Scottie Scheffler became just the 12th player to shoot under 60 on the PGA Tour with a 12-under-par 59 in round two of the Northern Trust.

Scheffler, 24, carded 12 birdies in a bogey-free round to reach 13 under overall in Boston, Massachusetts.

“You don’t get too many opportunities to shoot a 59, so to finish the job is really cool,” said Scheffler.

Dustin Johnson was 11 under after 11 holes but parred the final seven holes to card a 60 and lead on 15 under.

The world number four had two eagles and five birdies in his opening eight holes to reach the turn in nine-under-par 27 and two more birdies followed on the 10th and 11th holes.

If he had picked up one more birdie in his final seven holes, it would have been the first time that two players had hit sub-60 rounds in the same tournament.

Jim Furyk holds the record for the lowest round in PGA Tour history after shooting 58 during the 2016 Travelers Championship.

“I got off to a great start,” said Johnson on Sky Sports after signing for the lowest round of his career. “You’re definitely thinking about shooting 59 but I was just trying to play one shot at a time.

“It is what it is, it didn’t happen. But I’m still happy with how I played and my position going into the weekend.”

He leads Scheffler and Australian Cameron Davis (65) by two shots.

Scheffler reached the turn in 30 shots and hit five birdies from the 10th to the 16th, leaving him needing to birdie the par-five 18th to hit 59 and he two-putted from 80 feet to achieve the feat.

“I definitely was nervous, very nervous over both those putts on 18 and coming down the stretch, but I think it helped me focus a little bit more,” he added.

Scheffler, who broke the course record by two strokes, is the second youngest player to hit 59 on the PGA Tour after Justin Thomas did so aged 23 in 2017.

Ian Poulter had a four-under 67 to improve to nine under, while fellow Englishman Tommy Fleetwood hit a two-under 69 to move to seven under, with compatriot Paul Casey also carding a 69 to move to three under.

Northern Ireland’s Rory McIlroy missed a short birdie putt at the last as he shot a 70 to also beat the cut on the mark of three under, where he was joined by Tiger Woods (71).

England’s Justin Rose drained a 30-foot birdie putt on the ninth, his last hole, to also make the cut on the number.

The Northern Trust is the first of three events in the US tour’s FedEx Cup play-offs that will determine the PGA Tour champion for this season.