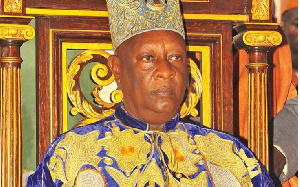 In 2007 when Solomon Gafabusa Iguru, the Omukama or king of Bunyoro kingdom of western Uganda was invited to a banquet organized by the State to honor Queen Elizabeth II when she arrives in the country for Commonwealth, Iguru refused. The king had asked the government to organize a private meeting between him and the Queen, but that had not materialized.

Three years prior to this, Iguru had sued the UK for “alleged atrocities committed by its soldiers during the colonial period,” demanding £3trillion (then $5,500bn) from the British monarchy.

“The British burned down houses, destroyed crops and introduced syphilis to my people,” Iguru was quoted by The Telegraph.

“They were responsible for the deaths of 2.4 million people. Moreover they stole my grandfather’s cattle and ivory.

Iguru’s grandfather was Chwa II Kabalega who ruled the Bunyoro kingdom from 1870 to 1899. A strong and optimistic king, Kabaelega, during his rule, developed the trading sector which brought in more wealth to better his kingdom. He also resisted colonization, westernization, and attempts by the British to take over his kingdom.

The British declared war on Bunyoro in 1894 and Kabalega successfully defeated the British for five years until he was found and shot by the British. He was captured and exiled into Seychelles where he stayed for 24 years until in 1923 when he was granted freedom to return to his kingdom. Unfortunately, Kabalega died just before reaching the borders of his Kingdom on his return from Seychelles.

Iguru, in 2004, showed clearly that he had not forgiven the British government for deposing his grandfather and stealing his land when he demanded what some felt was an outrageous figure which could bankrupt Britain at the time.

As The Telegraph reported that year, “Britain’s annual gross domestic product runs at about £1 trillion. Were the Bunyoro kingdom to win the amount it is claiming it would be the equivalent of every Briton paying out more than £60,000. The British Government would be forced to nationalise private companies and the economy of the western world would probably be plunged into depression. But Bunyoro’s 800,000 subjects would each receive £4.63 million.”

Still, a spokesman for the kingdom, Ernest Kizza, did not think that the payout would gravely affect the economy of Britain. “I am sure they can afford it,” he said. “I think they spent that much in Iraq. But it is their problem. If the British had not destroyed our kingdom, today we would be a superpower. We would be telling America to shut up.”

Kizza said in March 2004 that they will present written evidence including letters at the International Court in the Hague and with the British Commission in Kampala, Uganda, adding that the British took their land and gave it to a rival kingdom — Buganda.

Kingdoms in Uganda were banned in 1966 but ten, including Iguru’s Bunyoro, were restored when President Yoweri Museveni came to power in 1987.

So what happened to the case?

Ugandan media New Vision, in August 2005, reported that Bunyoro lost the case. In his ruling, the High Court’s Justice Richard Oscar Okumu-Wengi said the British government had refused to turn up for trial. Britain’s counsel, Joseph Luswata, had argued that his client “declined to submit to trial in a foreign land,” producing a letter written on November 25, 2004, to that effect.

The Attorney General, who was sued with the British government, did not also plead for the inclusion of the British government, Justice Okumu-Wengi said. Okumu-Wengi then sent the case back to the Land Division of the High Court for hearing to continue against the “Attorney General of Uganda, the Kabaka of Buganda, the Uganda Land Commission, and the 3,636 absentee landlords of Bugangaizi and Buyaga in Kibaale District.”

Eight years after this ruling, Bunyoro made a fresh push for compensation from the UK for land stolen from the kingdom and for abuses against its people. Bunyoro further claimed that a £700 million (then $1 billion) payout which was made, never reached the claimants.

Nigeria needs to be restructured – Lawyer