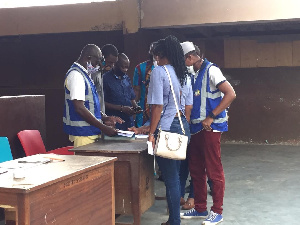 There are reports of a misunderstanding at City Engineers polling station in the Odododiodoo Constituency in the Greater Accra Region.

Citi News reports that “some voters budged into the centre despite the presence of security officers”. According to the report, the situation became a challenge to the security officers at post as they had “a difficult time controlling the crowd”; for they were “overpowered by the impatient voters.”

“We came here at dawn to form the queue, but after hours of staying here, the officers will just come and allow some persons in. The police officers are not doing anything about it, they are just here looking on without taking any action. They are not giving us the opportunity to get in that is why we had to force our way in,” a voter reportedly told Cit News.

The situation, reports say, has been brought under control.

The Odododiodoo Constituency is one of the areas considered as a flashpoint in the 2020 presidential and parliamentary elections.

At least 15 people were injured on Sunday, October 25, 2020, when the two parties, National Democratic Congress and the New Patriotic Party clashed during a health walk organized separately by the two parties.

According to sources, the violence occurred around the ‘Atta Mills Highway’, at a popular intersection known as ‘One Way’ of the area.

A series of videos that have emerged on social media detailing the incident showed supporters of both parties throwing stones and raining insults on each other.