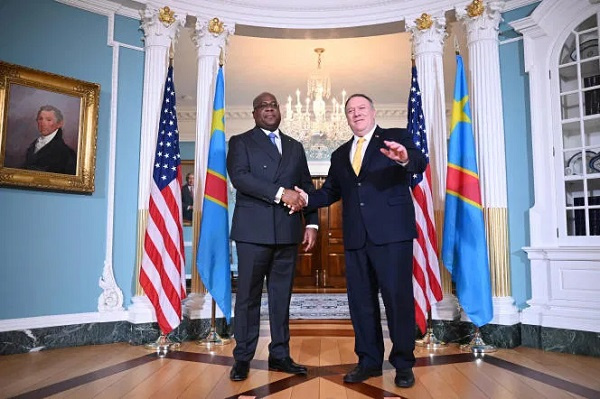 The Democratic Republic of Congo has rejoined a key trade partnership with the United States that will grant it duty-free access to US markets.

It follows a proclamation issued by outgoing US President Donald Trump on Tuesday night.

Washington suspended DR Congo from the African Growth and Opportunity Act (AGOA) some 10 years ago because of alleged human rights violations under former President Joseph Kabila.

The decision affirms President Tshisekedi’s efforts to reform and strengthen the DRC’s democratic institutions, protect human rights, and fight corruption.
What is the trade partnership?

Since its enactment in 2000, AGOA has been at the core of US economic policy and commercial engagement with Africa.

DR Congo’s main exports, copper and cobalt, are included in the agreement but are already tariff-free under the System of Preferences.
Split from Kabila

The announcement comes during a turbulent period in the DRC’s politics.

President Tshisekedi, who has been in office since January 2019, ended a coalition in December which was dominated by supporters of his powerful predecessor Joseph Kabila, who ruled for 18 years.

The move prompted a brawl in Parliament with ministers overturning desks and throwing chairs.

“It is recognition of President Tshisekedi’s commitment to bringing about the change the Congolese people desire and deserve,” Mike Hammer, the US ambassador to Congo, said in a statement.
Peace and security

“The return of DRC to AGOA is a significant achievement that is a clear manifestation of our Privileged Partnership for Peace and Prosperity,” said Mike Hammer, the US ambassador to Congo.

The partnership seeks to confront potential pandemics, promote peace and security, build a stronger bilateral relationship, and deliver results for the U.S. and Congolese people.

“The reinstatement of AGOA eligibility is another landmark achievement showing the progress made toward our shared goals.”