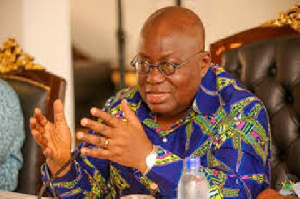 He added that his government cannot fail Ghanaians after voting the NPP into power to protect the public purse.

“Ghanaians want honest government. They want a government that will protect the public purse and ensure value for money in all public transactions. We cannot fail them and we must not fail them.’’

He made this statement while addressing his ministers at the Flagstaff House during their swearing-in ceremony on January 29, 2017.

Read the full story originally published on January 29, 2017 by Rainbowradio.

President Nana Akufo-Addo has admonished his newly sworn-in ministers to remain committed to the fight against corruption since it forms part of their commitment to citizens.

The president addressing the ministers at the Flagstaff House during the swearing-in ceremony said the issue of corruption in public life was a major topic in the 2016 elections.

Nana Addo said, ‘’the Ghanaian people want honest government. They want a government that will protect the public purse and ensure value for money in all public transactions. We cannot fail them and we must not fail them.’’

The manifesto of the party which they fought the 2016 election he noted made a comprehensive undertaken to guarantee public accountability.

The manifesto he added has committed the NPP government to establish by an Act of Parliament, an Office of Special Prosecutor independent of the executive with an exclusive remit to- ‘Investigate and prosecute certain categories of cases and allegations of corruption and other criminal wrongdoing; Including those involving allege violation of the public procurement act and cases implicating public office holders and politicians’.

The office of the Special Prosecutor he explained, will be created in a manner that is consistent with the constitution and its independence, will be protected and free from any change, witch haunting and political harassment.

He also charged his ministers to declare their assets like he did some few days ago.

He declared his assets on January 24, 2017, a day after the Department said it was impossible for him to do so because the office had run out of receipt booklets.

I am shocked; my motion was misinterpreted – Mahama Ayariga