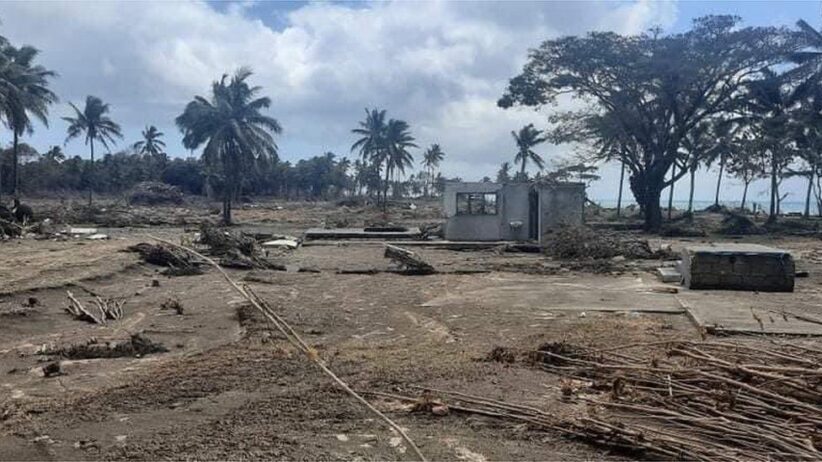 Tongan officials said up to 84% of its 105,000 population have been affected by ashfall and a tsunami caused by an underwater volcanic eruption.

The expulsion of volcanic ash and gases, as well as the flooding, have affected a majority of the population.

Three people were confirmed killed in the tsunami last week. The government has not announced any further deaths.

The three victims have been identified as Lataimaumi Lauaki a 49-year-old woman from Nomuka, Telai Tetu’ila, a 65-year-old man from Mango, and British national Angela Glover, 50, whose death was confirmed by her family last week.

The latest update from the Tongan authorities was shared on Monday by Australia’s diplomatic mission on the island, but dated to Friday.

The widespread emission of volcanic ash, gases and particles from the eruption has proven to be a massive challenge for Tongan officials.

In the immediate aftermath of the eruption and tsunami, there were fears that water sources had been polluted by the thick blanket of ash, and increase the risk of diseases like cholera and diarrhoea. However, officials noted that testing in recent days had cleared ground water and rainwater as safe to drink.

But, fine volcanic ash and emissions continue to pose a public health risk. Exposure could potentially cause breathing difficulties, affect the cardiovascular system, and irritate the lungs, eyes and skin.

The government update added that 62 people on Mango, one of the worst-hit islands, had to be relocated to the outer island of Nomuka “after losing their homes and all of their personal belongings.”

The government added however, that many of those residents may be moved again to the main island Tongatapu due to a lack of food and supplies.

It added that there were under two dozen injuries, mostly from Nomuka .

Rescuers have set up a field hospital there after the existing clinic was swept away in the tsunami.

Ships and planes carrying foreign aid have been arriving in Tonga since last week, after locals were finally able to clear the island’s only airport runway of ash.

New Zealand and Australia have led the international response, using their air force and naval carriers to make contact-less drops of supplies including water, food, hygiene kits, tents as well as water-treating and telecommunications repair equipment.

The remote archipelago was cut off for five days because the explosions severed the sole fibre-optic sea cable bringing internet to the island.

But even communication between Tongatapu, the main island, and the outer islands remains “an acute challenge”, the Tongan government statement said.

They added that a ship was due to arrive this week to repair the internet cable. Firms had previously estimated the cable could take up to four weeks to repair.

The arrival of foreign aid has vastly accelerated the flow of information from the stricken island.

Due to Covid fears, the aid work is still all being carried out by locals through groups like the Red Cross. Tonga, which is effectively Covid-free, has requested no foreign aid workers land in the country to prevent an outbreak.

But the UN’s representative in the region told the BBC that could change given the scale of damage.

“It was practice in previous disasters like Cyclone Gita [in 2018], and this disaster is a lot more severe than that,” said Sione Hufanga, the UN representative in Tonga.

“This is a global response that we provide humanitarian and technical support to the country affected,” he said.

SA military probes cause of fire at air force base

Hundreds of children held by IS in besieged prison in Syria